OK.  Don’t start calling me names yet.  Indeed we are all fools in one way or another.  Hopefully though our foolish ways are pretty insignificant in life.  But when our foolishness starts to impact others in a negative way, it’s time to make a change.

I really had high hopes for this man Pope Francis.  I mean other than we were both named after the same Saint, he appeared to be a Pope who finally gets it – and God knows we need leaders who ‘get it.’    Call me simple but just take a look at this guy and you got to love him; “the eyes are the windows of the soul.”

I’m very sad and very sorry to say however that Pope Francis is just another fool when it comes to The Church and Islam.  And this type ‘naive foolishness’ is lethal for the very people that he represents.

The Popes of the Catholic Church have become Poster Children for the saying; ‘Too much of anything is no good.’  They pride themselves with having so much compassion that they disregard evil and the welfare of their ‘flock’ in their foolish and suicidal desire to be so compassionate and forgiving to all.

I thought we had seen it all when we saw Pope Paul [1] kissing The Koran. 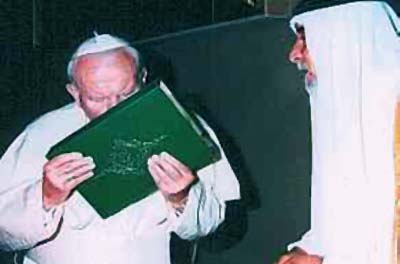 Don’t these Popes read the news?  Is it against the Catholic religion to pick up a history book?  What in God’s name are these so called leaders of the Christian world doing??    Have they never heard of the Islamic ‘Profit’ and warlord Mohamed and his barbarism against Jews and ‘infidels.’   Have they never read the Koran or the Hadith?  It seems from their actions that they have more compassion for Muslims than they do the Christians; who continue to be slaughtered by Muslims every day of the week!

I’ve just about lost all respect for the Christian Church, especially the Catholic Church.  Their continuously ‘turning the cheek’ in the face of evil and immorality is diminishing the Church into just another business instead of ‘The Rock’; the moral and spiritual foundation  established by our Lord Jesus Christ .

There is no wonder why the Church is slowly dying.  With fools like this leading the flock, it’s only a matter of time before the flock turns around and heads in a different direction… 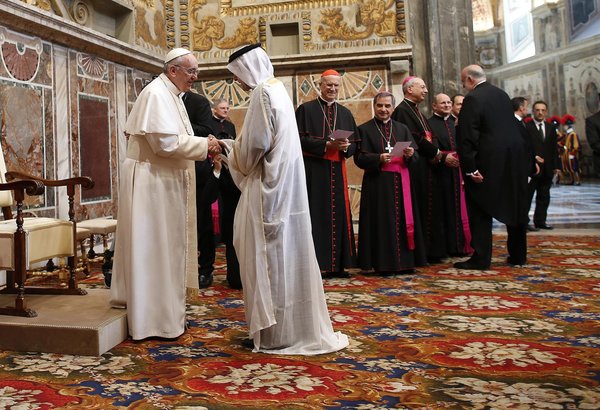 The Vatican Makes Itself The Seat Of The Antichrist, And Pope Francis Has Muslim Prayers Declared Within The Vatican For The First Time In Its History

Posted on June 7, 2014 by Theodore Shoebat  –  The Vatican has made itself the seat of the Antichrist, because for the first time in its history it will be having Islamic prayers declared from its premises, a measure planned and organized by Pope Francis himself.

The Vatican has stated that the prayers would be a “pause in politics”, but the entire procession will naturally be political because Islam is political, and additionally, the event is being conducted “to rekindle the desire for Israeli-Palestinian peace at the political and popular level”, a blatantly political move.  …

I do not write this to attack Catholics, but to warn them of the Antichrist spirit that has entered the Vatican. What is happening in the Vatican is actually a fulfillment of what Pope Leo XIII actually warned about, in 1846, that the Vatican will one day become the seat of Antichrist:

Rome will lose the faith and become the Seat of the Antichrist… the Church will be in eclipse.

Posted on December 12, 2013 by John R. Houk  – Geert Wilders is a truth-teller about the inherent nefariousness of Islam. While Muslim Apologists shout from the roof tops that Islam is peace, all you have to do is watch a TV news report to hear about Muslims rioting in the streets because their prophet or their deity was insulted by the kafir; i.e. the infidel or non-Muslim. …

regardless of how you interpret the Pope’s stand on Capitalism that which concerns me is his exhortation pertaining to Islam.

Faced with disconcerting episodes of violent fundamentalism, our respect for true followers of Islam should lead us to avoid hateful generalisations, for authentic Islam and the proper reading of the Koran are opposed to every form of violence. (Quoting Pope Francis in Evangelii Gaudium; Pope Francis and “Authentic Islam”; Gloria.TV News Briefs; 28/11/2013 05:41:02)

It is my sense that Pope Francis has extended Christian Love unscripturally. A proper reading of the Quran makes it obvious that those we label as Radical Muslims are actually following the authentic Islam. Those Muslims that are either self-deceived or updating their faith by excluding the violence inherent in the Quran are not practicing the Islam espoused by its prophet Mohammed and at least the first thousand years of Islam’s existence.

There is an Expose Islam movement and those writers involved in exposing the real/authentic Islam are often called Counterjihadists. One such person is the Dutch politician Geert Wilders. Mr. Wilders had a bit of controversy a couple years or so ago with his views including producing an expose Islam video entitled “Fitna”. The relatively short documentary exposes the dark nature of Islam. That video got Wilders in trouble with the law in the Netherlands. He was actually prosecuted for Hate-Speech for doing nothing more than revealing what the actual Quran says. I was surprised and gratified when the court system in the Netherlands found Wilders not guilty. I was surprised because all of Europe has been so into multicultural political correctness that offending Islam with the truth is considered Hate-Speech and is prosecuted. 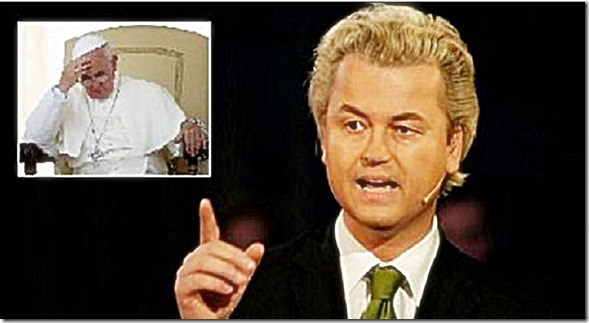 In true Counterjihad style Geert Wilders took a public stand against the portion of Pope Francis’ Evangelii Gaudium which in an act of dhimmitude says that “authentic” Islam is against violence. The public stand came in the form of an open letter to the Pope. I am completely supportive the Wilders open letter. Even though it is not politically correct the open letter sets the Pope straight from the Quran and Sunna.

Open letter to his Holiness Pope Francis   By Geert Wilders

Your Holiness, In your recent exhortation Evangelii Gaudium (Paragraphs 247-248) you draw the world’s attention to the indebtedness of Christianity to the Jews and their faith. The exhortation also contains a sharp condemnation of the terrible persecutions which the Jews have endured from Christians in the past.

Unfortunately, they are in sharp contrast to the expressions of hatred which were voiced last October by the spiritual leader of Sunni Islam, Ahmad Al-Tayeb, the Grand Imam of the Al-Azhar Institute in Cairo.

During an interview, aired on Egyptian television on October 25, Grand Imam Ahmad Al-Tayeb reaffirmed the relevance of Koranic verse 5:82, which states that of all people the Christians are closest to the Muslims, while the Jews are strongest in enmity towards them. This verse has inspired centuries of Islamic hatred of Jews.

Al-Tayeb’s invocation of Koranic Jew-hatred is in line with fourteen centuries of Islamic teaching. Grand Imam Al-Tayeb’s predecessor at Al-Azhar, Muhammad Sayyid Tantawi, even wrote a book, entitled The Children of Israel in the Koran and the Sunna, in defense of Jew-hatred based on Koranic teachings.

The current suffering of Christians from Islamic persecution in Syria, Iraq, Egypt, Sudan, Nigeria, Pakistan, Indonesia, and so many other countries, clearly indicates what Christians have to endure from the followers of the Koran. What atheists and Jews, who are considered the worst enemies, have to endure from Islam is even worse.In your exhortation Evangelii Gaudium (paragraphs 252-253) you state that “authentic Islam and the proper reading of the Koran are opposed to every form of violence.”

Reality does not confirm this statement.

The Koran is full of bellicose and hate-mongering verses against non-Muslims. Your Holiness will be able to find them if he reads the Koran, but I will name just a few:

4:89: “If they turn their backs, take them, and slay them wherever you find them; take not to yourselves any one of them as friend or helper.”

5:33: “This is the recompense of those who fight against Allah and His Messenger, […]: they shall be slaughtered, or crucified, or their hands and feet shall alternately be struck off; or they shall be banished from the land.”

8:60: “Make ready for them whatever force and strings of horses you can, to terrify thereby the enemy of Allah and your enemy.”

9:5: “When the sacred months are drawn away, slay the idolaters wherever you find them, and take them, and confine them, and lie in wait for them at every place of ambush.”

9:30: “The Christians call Christ the son of God. That is a saying from their mouth; they but imitate what the unbelievers of old used to say. Allah’s curse be on them.”

9:123: “O believers, fight the unbelievers who are near to you; and let them find in you a harshness; and know that Allah is with the godfearing.”

47:4: “When you meet the unbelievers, smite their necks.”

I hope that the Holy Father will help us defend the West’s Judeo-Christian and humanistic civilization, to which even atheists and agnostics owe their freedom and democracy.

Nothing will be gained by a refusal to face reality.

We must speak the truth about Islam — the largest threat to mankind in this present age.

Member of the Dutch Parliament

Leader of the Party for Freedom (PVV)