“Sometimes, you have to admit you’re wrong,” the newspaper said in an un-bylined editorial on June 27. “And, we were wrong.”

Every time I see or hear about Obama and see how he is doing all he can to destroy our country I get sick.  Then I think about the 63 million ‘Americans’ who voted for him and I get downright scared.   There’s a good chance we can overcome and turn back the legacy of Obama BUT what about those 63 million people who were naive and foolish enough to vote for such a man with absolutely no credentials and a very shady resume?    They still have the power of the vote and so we’ll never be ‘out of the woods’ until they see the error of their ways and hopefully make sure they examine their next candidate. 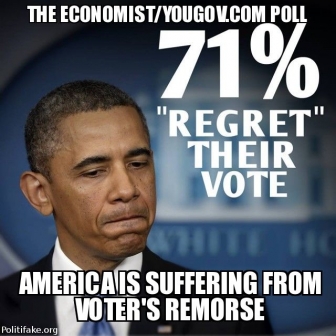 Well the first step will probably be the hardest for this crowd because their vote proved that their vanity is more important to them than their country.  Yes the first step for these 63 million people would be to do what The Billings, Montana, Gazette did; apologize.    (I know you’re probably laughing and thinking how naive is this guy to thing these sycophants would actually wake up and apologize?  So I admit that I am a dreamer and this is could be one of my wildest ones!  But dreaming is what Americans do, regardless of how much the inept lawyers leaders that control America try to get in our way.)

And the president is apparently such a disappointment, that the Billings Gazette in Montana felt compelled last week [4] to apologize to its readers for endorsing him in 2008 over Sen. John McCain, R-Ariz.

At least we were “winning battles in Iraq” when George W. Bush was president, reads the editorial, titled “Gazette opinion: Obama earned the low ratings.”

The editorial contained a list of what the paper’s editors consider the president’s mistakes:

— The scandal over NSA spying on Americans

— Obama’s “war on carbon” and his failure to approve the Keystone XL pipeline.

— The failure of diplomacy in Iraq that put the country on the brink of civil war.

— The Bowe Bergdahl swap, which made the administration seem incompetent.

— Mismanagement of the Department of Veterans Affairs that led to to veterans dying before they could receive medical care.

— Obama breaking his promise to become the “most transparent administration in history.” The Gazette said the president’s administration is so opaque that is has earned a reputation worse than that of Richard Nixon.

— The failure of Obamacare, which the paper called a “boondoggle.”

These are all signs — none of them definitive on their own, necessarily. However, when taken in completely, these demonstrate a disturbing trend of incompetence and failure. It’s not just that Americans are in a sour mood about national politics. That’s probably part of it. Instead, Obama has become another in a line of presidents long on rhetoric and hopelessly short on action.

Apologizing for an endorsement from 2008? Well, better late than never.