Just in case you have been hiding in a cave for 1400 years, as it seems most of the Western World has been doing, you may want to now wake up and see the reality that is Islam.(1)  [1] What once was 'The Holy Land' has become Islam's base of operations for it's promise to take over all countries and rule the world by Sharia, Mohamed's, Law. (2) [2]    Bethlehem, the city of the Manger and Baby Jesus is now Muslim.  The Christians have been killed or forced out.  As is the case with just about all the Middle East and North Africa, once the cradle of Christianity has now been conquered and is under total control of Mohamed's Poison .(2) [2]

[3]Israel, once the land of David and Jesus Christ, is now a Muslim target for rockets and Islamic butchers who invade a home at night and slit the throats of Mom and Dad and the children and even the babies – as they sleep…(3) [4]  Daily the Jews of Israel must face the threat of death and destruction at the bloodthirsty hands of the followers of Mohamed and the annihilation of their country by a psychopathic Iranian Islamic regime.

Syria like Israel is one of the last countries in The 'Holy' Land that Christians can worship and feel safe in.  In the last 10 years under Bashar Assad, Syria has made more advances and given more freedoms to it's people than just about any other country you can name.   (I've seen it with my own eyes (4) [5] )

Like Sadam in Iraq and Gaddafi in Libya, The Shah in Iran and Mubarak in Egypt,  Assad is the choice of those who want freedom in an Islamic world.   In the Middle East you either have a 'Dictator' ruling over a secular government, or you have an Islamic Theocracy as in Iran;  and now coming soon to Egypt and Libya.

[6]The Bottom Line:  Which would you choose to live under – A secular autocracy ruled by one of the ‘bad guys’ above or an Islamic Theocracy under Sharia law and the Psychopaths below?? – An easy question for Christians, Jews, and civilized man…

Unbeknownst to the history and reality challenged minds of the West; Democracy and Islam are polar opposites.   There can be no freedom in a country where Islam is the ruling body politic.  A 'freedom fighter' in the Islamic world is an infidel.

… one of the most authoritative lexicons of the Arabic language, mentions that the word 'Islam' is derived from the root verb istaslama; which means 'to submit' or 'give in' or 'surrender'.    The root word of Islam is "al-silm" which means "submission" or "surrender."   It is understood to mean "submission to Allah." In spite of whatever noble intention has caused many a Muslim to claim that Islam is derived primarily from peace, this is not true. (W) [8]

The 'rebels' in Syria are fighting as did their brothers in Egypt and Libya.  They are not 'freedom fighters', they are, like Bin Laden, soldiers of Islam.

[9]Like his father before him, Bashar Assad welcomes Christian leaders and embraces the Syrian Christians, who he often visits during Christian holidays in Syria.  Many Christians hold high offices in the Syrian government.  Of course all of this goes against the Islamic promise of conquest and Sharia Law.  So the real Muslims want him out so they can replace his secular government with a Muslim Theocracy as they have in Egypt, Libya, Tunisia, Turkey, Iran etc.

I'm not Mr. Assad's biggest fan, but the fact is that the Christians and Jews have lived a good life in Syria thanks to a secular Assad regime.   Syria is where most of the Iraqi Christians fled to after Sadam was defeated.  If Assad is defeated, an Exodus will once again be the only way to survive for all of those under the sword of Islam.

Which begs the question; "Why the hell is a Christian world rooting for Islam in any of these uprisings?  Has the Christian world become that weak and stupid that in this 'War for Survival' (6) [10],  the Christians choose to comfort the enemy instead of killing him?    Have the modern day Christians become so emasculated that they are in essence 'handing over' the civilized world to Mohamed's cult of death and destruction?   Are they selling their soul to the Devil?"

I suggest that 'The Good Guys' are not selling their soul to the Devil, in fact, being that they 'hold all the cards' when it comes to strength and numbers, they are indeed giving their soul away for no money and no reason… 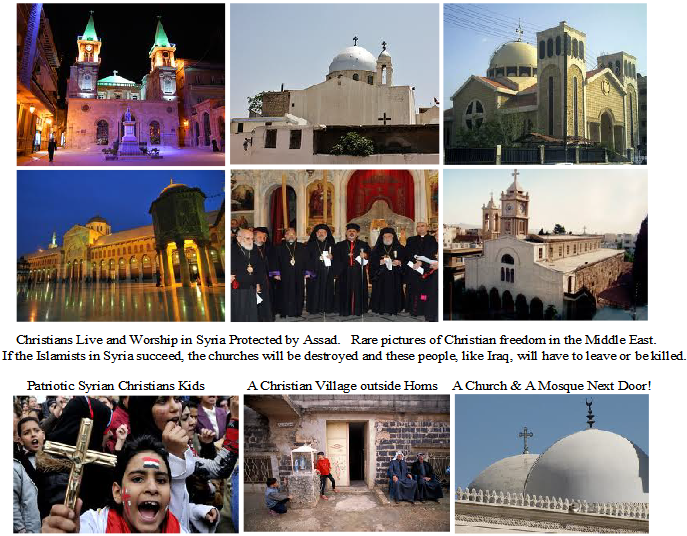 [11]But of course you would never know any of this if you listen to the BDM; The Brain Dead Media.(5) [12]   It is beyond this author's belief how these so called 'journalists' can report without any consideration given to reality, history or even the latest current events in the Middle East!  It is an illustrative example of the brain dead liberal media; pay no attention to facts and realities, only your own opinions and ideology; even if it means supporting evil and indeed maybe even your own demise!  "There are none so blind as those who will not see"…

Fortunately we have the Internet and courageous Americans like Pam Geller over at Atlas Shrugs who report the facts and the realities that a suicidal world media refuses to recognize and report.

Here's the latest on the Syrian fight to stop another Islamic conquest::

Pick your monster. President Assad protected the Christians in Syria ….. don't get me wrong, I have no use for Assad. It is monstrous how he has killed his own people. However, I am disgusted at how the world and its MSM have neglected to report on the jihadists that are attempting to take over Syria. Instead, we only hear about the benign freedom activist that was gunned down holding a banner rather than a weapon. No one ever mentions the word "jihad."  But, jihad is occurring. In one city the Islamic supremacists have expelled and/or executed most of the Christian population.

Where is the leader of the free world? Where is Obama's outrage? So many of these Christians sought refuge in Syria after being forced to flee Iraq. The Obama administration has consistently refused to grant asylum to Christians fleeing persecution in Muslim countries while flooding our shores with whole Muslim communities under the refugee resettlement program.

While the world is raising concerns over rights abuses by anti-government forces in Syria's ongoing violent conflict, few would even know that militant Islamists have expelled the majority of Christians from the western city of Homs, according to the country's largest church.  …