[1]Allowing these barbarians to build one more mosque is giving this death cult credibility.  Allowing one more Muslim to immigrate to any civilized country is endorsing their evil.  Allowing one more person to call this cult a religion is ignorantly accepting their lethal propaganda.   To send one more dollar to an Arab country for oil is akin to paying someone to kill you and your family.   To allow their headquarters in Mecca & Riyadh to exist one more day is allowing the enemy more time to plan your destruction.

"A picture is worth a thousand words"

Everyday the suicidal morons who run this country and the media talk about the "butcher" Assad and how he must be overthrown.  They neither know about or care about the truth or the reality of what is happening in Syria.  The fact that they only need to look at what just happened in Egypt and Libya to understand is totally ignored by their dead brain cells.  Their only concern is themselves and flaunting the power that they have been handed by an ignorant and lethargic electorate.

Assad is the good guy here, believe it or not.  He's trying to keep his country out of the hands of the Islamists who will, as they ALWAYS DO, turn the country into an Islamic State:  Goodbye Christians and Jews and hello death and destruction in the name of Allah!

Here's the latest horrific example of what the "rebels" ( remember those 19 "rebels" on 9/11? ) are doing in the name of Islam and a realistic look at what's to come if Assad is overthrown.   Just like when the Islamists took over Iran, Egypt and Libya, the West sits back and supports the people who have sworn to kill them.  Suicidal Jackasses is indeed too diplomatic when labeling Obama, Clinton, and the rest of the Western "leaders" and media … 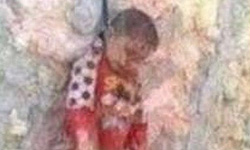 Obama is supporting these monstrous jihadists. Where is the Western media on this? They are backing these monsters as well.These jihadists are killing journalists. But the media gets its talking points from jihadists groups here in the US. Hamas groups and Muslim Brotherhood groups (like CAIR) are pressuring Obama to step support for these murderers. Assad's Syria was bad, but this? Pure hell. The Muslim Brotherhood has formed their army in Syria. Millions of Christians and Alawites will be slaughtered in a bloodbath.

Obama has completely abandoned the religious minorities that are being crushed in the "Islamic spring." As the violence continues to escalate against Christian women and children in Egypt, part of Obama's anti-freedom foreign policy is to suppress the horror of what is happening under his watch. He has gone so far as to remove the Religious Freedom Section from the State Department's Human Rights reports …